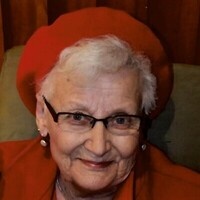 Vivian Marie was born on April 9, 1927 in Canby, MN to Thomas and Rita (Willette) Zimmerman. Her family moved to Blue Earth in 1939.  She graduated from Good Counsel Academy High School in Mankato.  Following High school, and Normal Training, she taught in a country school for two years, prior to marriage to Otto Pfaffinger on September 1, 1948 at SSPP Catholic Church.

She and Otto raised six children and farmed west of Blue Earth. Being the daughter, wife and mother of a farmer, she knew a lot about farming, and maintained a deep interest in it.

It is fitting that Vivian should go home to the Lord on Memorial Day Weekend, as this was a reverent holiday for her. Vivian was a lifelong member of the American Legion Auxiliary and the VFW Auxiliary, was a Past President of the Legion Auxiliary, and was one of the Legion Color Guard founders. She felt very strongly about honoring veterans.

She has been a member of SS Peter and Paul Catholic Church since 1940, and was an active volunteer. Vivian was a past WWC Council (Church Women United) President. She also was Regent of the Catholic Daughters and a member for 73 years. She was a 4H leader and managed the 4H food stand at the county fair for 2 years. Vivian also worked for 2 years managing the school lunch program at SSPP school.

Due to the current restrictions on public gatherings, a memorial service will be held at SSPP Catholic Church in Blue Earth at a later date. A private family burial was held at Calvary Cemetery in Blue Earth with Father Brian Mulligan officiating.

Web tributes may be left at www.pattonfh.com. Memorials can be sent directly to your local Hospice, American Cancer Society, or SS Peter & Paul Church.

To order memorial trees or send flowers to the family in memory of Vivian Marie Pfaffinger, please visit our flower store.