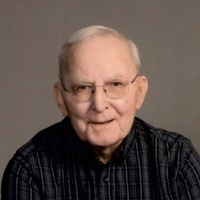 On January 26, 1933, LaVerne Tibbetts and his twin sister LaVaye were born in Huron, South Dakota to Donald and Ruth (Clement) Tibbetts. On November 16th God reunited LaVerne with his family.

Vern spent most of his youth in Bancroft, South Dakota, and graduated in 1952 from Bancroft High School.

In 1959 they moved to Blue Earth, Minnesota, where Vern worked for Pooley’s scrap Iron, and then Telex Communication for 27 years.

Tibby was an avid sports fan, whether participation or watching. He played basketball, baseball, and was also involved in trap shooting and bowling. He was an avid outdoorsman that loved to fish and hunt.

Vern and Twila spent 30 years enjoying and entertaining at their lake home on Upper Whitefish in Northern Minnesota.

He also enjoyed playing poker on Wednesday’s with his buddies.

Vern was an active member at Trinity Lutheran church, serving as a trustee, and usher. He was also on the Blue Earth Volunteer Fire Department for 20 years and served as Chief until retirement.

To order memorial trees or send flowers to the family in memory of Vern Tibbetts, please visit our flower store.