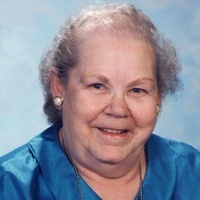 Velma Olive Griggs, aka “The Pie Lady” died Wednesday August 22, 2018 at the age of 96. A memorial service will be held Friday August 31, 2018 2pm at Hope United Methodist Church with visitation one hour prior to the service. Velma was born January 27, 1922 to Myron and Olive (Crouch) Baker in Mason City, IA. She was one of six children. In 1958, Velma and her husband Bobby moved to Blue Earth where she ran The Grill Café for many years, where the name “The Pie Lady” came about. She was known throughout the community and beyond for her wonderful pie baking skills. Velma also enjoyed quilting, reading, making ceramics and traveling with her husband, especially to all the different baseball parks.  She was a very creative woman who liked to keep busy.  In 1969, after a devasting fire she went to work for Juba’s where she stayed until she retired in1998. For the last 6 years, Velma enjoyed her time at Emerald Crest Assisted Living in the cities and always welcomed guests who brought her chocolates. She is survived by her daughter; Janice (Ron) Mosloski of Fairmont, MN. Sisters: Izetta Weaver of Clear Lake, IA and Helen Grattidge of St. Louis, MO. Five grandchildren; Bobbi (Robert) Hoebelheinrich, Mark Pettey, Cherie Taylor, Tory (Melissa) Mosloski and Christy (Mike) Lamb, Daughter-in-laws; Barb Pettey and Pauline Pettey. Eight great grandchildren and 1 great-great grandchild, as well as many other relatives and friends. She is preceded in death by her parents, husband Bobby, sons; Pat and Larry. Sister; Bonnie Benner, brothers; Lewis and Roy and a grandchild; Patrick Pettey II.
To order memorial trees or send flowers to the family in memory of Velma Olive Griggs, please visit our flower store.