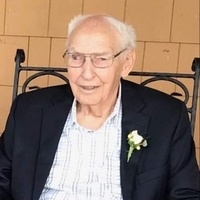 Thomas Edwin Hanson died on Monday, December 30, 2019 at the age of 92. At the time of his passing, he and his wife of 68 years, Margaret, continued to reside in Guckeen Minnesota, with the loving care of their son, Peter.

Tom was born, the fourth of five children, February 6, 1927 in Rice Lake, Wisconsin to Henrietta (Sheehan) and Edwin Hanson. He graduated high school early to enlist in the Navy at the end of World War II. After the war, he attended the University of Minnesota and then St. John’s University where he earned a Bachelor of Science degree. Margaret was attending the College of St. Benedict’s when they met. They married on June 5, 1951 at Sacred Heart Catholic Church in Faribault Minnesota. They raised their family in Faribault, MN, Pickstown, SD and Guckeen, MN. Throughout, Tom taught nearly every high school subject over his 44-year career including 35 years in Granada. His students were much loved by him and grew in knowledge and character because of his dedication and humor. He was often regarded as their favorite teacher.

Tom was a fountain of information and knew something about everything. He was a lifelong learner who passed his vast, unique knowledge and curiosity on to generations of Hansons. The center of his life and true joy was always his family. We remember long summer afternoons on the porch filled with card games, conversation and socks with sandals. He was quick to laughter and the king of long jokes. His hugs were the warmest and his love unconditional. We will miss his embrace and smile as he bid us farewell.

Memorial Visitation will be held Friday, January 3rd from 9-11am and a Catholic Mass of Christian Burial at 11am at St. Peter and Paul Catholic Church, 214 Holland St, Blue Earth, MN.

To order memorial trees or send flowers to the family in memory of Thomas Edwin Hanson, please visit our flower store.