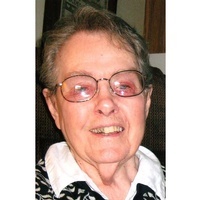 THELMA CLARA (CLARK) BROMELAND, age 93, of Frost, died Monday, January 1, 2018, at St. Luke’s Lutheran Care Center. Visitation will be 5:00pm-7:00pm on Thursday, January 4, 2018, at Patton Funeral Home & Cremation Service, 400 E. 14th Street in Blue Earth and one hour prior to the service at the church.  Funeral services will be held on Friday, January 5, 2018, at 10:30 AM, at United Lutheran Church in Frost, with Rev. Arne Halbakken officiating.  Burial will be in United Lutheran Cemetery, Frost, MN.  Web tributes may be left at www.pattonfh.com Thelma Clara (Clark) Bromeland was born on a farm near Blue Earth on December 8, 1924. She attended country school near Guckeen and Blue Earth, before attending high school in Blue Earth. Following graduation she attended Teacher Training and began teaching country school District 89 near Brush Creek. While she was living and teaching in Brush Creek she lived with Anna and John Brandsoy where she met their nephew, Donald Bromeland. They married at the First Baptist Church of Blue Earth on July 28, 1946. Donald and Thelma farmed in Emerald Township near Frost for 40 years before retiring to their home in Frost in 1986. In 2009, Thelma moved to St. Luke's Friendship Court and later to the care center. Thelma was the mother of five children: Andrew (LeAnn) of Salem, OR, Duane (Alice) of Frost, Virginia (Joel) Rudloff of Minneapolis, Kristin Juliar of Bozeman, MT, and Kenneth of Farmington, NM. She had eight grandchildren: Brandon (Jill) Bromeland, Holly (Elliot) Alexander, Amanda (David) Gilman, Erin Bromeland, Philip (Anna) Bromeland, Jacob (Mi Yeon) Juliar,  Timothy (Silvija) Juliar, and Angela (Matthew) DeWees. Thelma was blessed by thirteen great grandchildren, with another one expected any day. Thelma helped her husband with farming and was very active in her church and community. She taught Sunday School and Vacation Bible School at North Blue Earth Lutheran Church for many years, served in several offices of the Ladies Aid and was an officer of the Conference Ladies Aid. She was a 4-H leader, served as President of the Frost Community Club and was the secretary/treasurer of the Faribault County DAC.  Thelma was the first Volunteer Coordinator for St. Luke’s Care Center and later was a volunteer at St. Luke’s for many years. She also was a member of the Region 9 Area Agency on Aging and helped form the Interfaith Caregivers. She often said that the most enjoyable times in her life were the opportunities to work with children. Nothing pleased her more than running into an old Sunday School student who would introduce her to his/her spouse as a former teacher. Thelma was a wonderful baker and she loved baking cookies with her grandchildren. Her great grandchildren brought her a great deal of joy. Thelma is survived by her children and her sister, Jean Rose. Thelma was preceded in death by her husband, Donald Bromeland, her parents William and Anneta Clark; two brothers, DeVere and William; two sisters, Kathryn and Helen; and an infant sister. In lieu of flowers, donations can be made to St. Luke's Lutheran Care Center or United Lutheran Church of Frost Memorial Fund. Thelma's Memorial Folder
To order memorial trees or send flowers to the family in memory of Thelma Clara Bromeland, please visit our flower store.