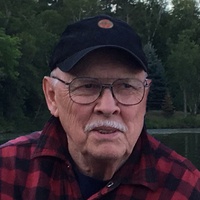 Memorial services will be held at 4pm Tuesday, June 29th Patton Funeral Home in Blue Earth, with Reverend Dr. Jeanette Bidne officiating. A time for visitation will be held from 3-4pm, before the service at the funeral home.

Terry worked at Joseph F Palen as a draftsman then went into sale & design. He went to work for Studio 70, a division of Super Value, where he was the manager of food service equipment division and retired in February 1996.

Terry was a member of the Minnesota National Guard HHC & Band 47th DISCOM, where he marched & played the snare drum in two inaugural parades, as well as summer and winter carnivals in the metro.  He was also a member of the American Legion Post 89.

Terry enjoyed working and tinkering on cars so much, he kept track of every car he owned. He continued to draw, draft, and paint after his retirement. Trapshooting competitions were a big part of his life. He found success and was at the top of his game and won many awards & championships. He was a member of the Richfield -Bloomington Conversation Club. Terry also enjoyed hunting & fishing, spending as much time as possible at the cabin on the lake, his early morning coffee & cookies, and watching the sunrise and fog lift from lake. Terry loved listening to the sounds and sights of the north woods, this was his happy place. He also loved getting together with friends and family. He liked to keep busy!

To order memorial trees or send flowers to the family in memory of Terryl G Mikkelson, please visit our flower store.