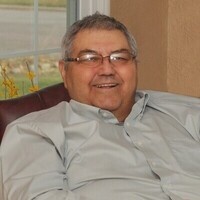 Your outpouring of love and sympathy after Terry’s death overwhelmed and strengthened us, and your stories have kept us smiling.

Since we did not get to see any of you in person, we would love to have you join us on Friday, August 6, 2021, for a brief committal service at Riverside Cemetery at 4:00p.m., followed by a meal and fellowship (and complimentary golf for those who wish to play) at Riverside Town and Country Club at about 4:30.

We can’t wait to see you!

A family service will be held at Shepherd of the Lakes Lutheran Church in Fairmont, Minn. on Friday, April 2, at 1 p.m. A live stream of the service will also be available on the Patton Funeral Home website.

A remembrance and celebration of Terry’s life will be planned later this year when it is safer to gather, embrace and share memories and stories.

Terry was born May 14, 1950 in Blue Earth, the oldest of seven children. After the death of his father, when he was 12 years old, coach Hal Schroeder became his mentor and guide, listening when he needed to talk and putting a tennis racket in his hand. From then on, he was hooked, spending countless hours on the court as a member of the winning Blue Earth tennis team.

Terry graduated in 1968, then managed the Makotah Youth Center and worked at Gering Industries before returning to college for his degree in education. He taught and coached in Estherville, Iowa for six years and then was hired at Blue Earth Area in 1990, retiring from teaching in 2012, and from coaching in 2014. Terry coached a lot of people. He cared for all of them.

He married his wife Deb in 1978. Astonishing his friends, he actually missed several Blue Earth football games during their courtship. Their children, Casey and Brian have great memories sharing popcorn in Dad’s recliner, learning to play catch in the front yard, tagging along to team practices and open gyms, weekend tournaments, spending an entire summer on the Riverside driving range, and always being able to look back fora smile or needed encouragement during golf meets.

He was intense, detailed, long on opinion, short on tactfulness, questioned everything, was regretful of his shortcomings, but always bolstered by the knowledge of full and free forgiveness in Christ and thankful for every earthly blessing God gave.

Preceded in death by his parents, two brothers, infant daughter, mother and father-in-law.

To order memorial trees or send flowers to the family in memory of Terry Barnes, please visit our flower store.