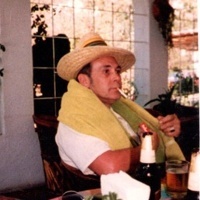 Ronnie Lee Hall “Hallsey”, 83 of Blue Earth passed away Monday June 17, 2019 at St. Luke’s Care Center in Blue Earth with his wife Val, family & friends by his side. A Celebration of Life will be held 4-7PM Friday June 28, 2019 at Patton Funeral Home in Blue Earth with a prayer service officiated by Rev. Reid Ellis at 6:30PM and an honor guard salute to follow. Burial will take place at Ft. Snelling National Cemetery at a later date.

Ronnie has been fighting the fight since the end of December 2015 when a large aortic aneurysm was discovered and because immediate surgery needed to be performed, he was the first person in the US to have a Gore stent put in by Dr. Gustave Oderich and a team of 27 others from Rochester Mayo Clinic.

Ronnie Lee Hall, Sr. was born during the big snow storm of 1936 on January 19 in Fairmont, MN to Raymond Banks Hall and Gladys (Peterson) Hall-Pilcher. He attended school and church in East Chain, MN. He was in the Army during the Korean War. Ronnie worked as a steel worker, welder, mechanic and many years of OTR local hauling, long distance hauling, driving his own rigs or contracted on with various trucking firms. There’s not much he couldn’t do and would attempt to FIX it even if he didn’t know exactly what he was doing.

He was married to Val Ann Lane on June 15, 1974, they just spent their 45-year anniversary together. Ronnie loved the Vikings, the Twins, fishing, golfing, socializing, auctions and sitting on the porch people watching. He also loved his companion/puppy “Maggie” that came back with him from a trip out to North Carolina. She was his special “shot gun” rider for 16 years until her own health issues took her to heaven.

To order memorial trees or send flowers to the family in memory of Ronnie Lee Hall, please visit our flower store.