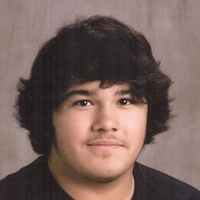 Riley Mitchell Garvick, age 16, of Elmore, MN, passed away on Thursday, July 27, 2017 at his home in Elmore.  Funeral Services will be held at 11AM on Saturday, August 5, 2017 at Elmore United Methodist Church with Rev. Mark Brickzin officiating.  Visitation will be from 5-8PM on Friday, August 4, 2017 at Patton Funeral Home with a prayer service starting at 7PM and a one hour visitation will be held prior to the service at the church.  Interment will take place immediately following the service at Riverview Cemetery in Elmore.  Online condolences may be left at www.pattonfh.com. Riley was born on May 14, 2001 to Carlos Leyva and Rebecca Garvick in Fairmont, MN.  Riley attended Blue Earth Area Schools.  He loved sports.  Riley played and watched his two favorite sports: baseball and football.  He played third-base and pitcher in baseball and offensive and defensive line in football.  He sang in the Blue Earth Area School choir and played Viola in orchestra.   Riley had a passion for fishing and hanging out with his friends playing video games, sometimes all night.  He also enjoyed listening to music and collecting Pokemon Cards.  Riley cared deeply for his family and friends, always watching over them and always will be. Riley is survived by his mother, Rebecca Garvick; father, Carlos Leyva; siblings, Nora and Carla Leyva, Ian and Isaiah Cornelio, Layden and Bailee Ann Bassett; grandparents, Rick and Rose Garvick and Juan Leyva; stepmother, Shannon Schulz; and many other loving aunts, uncles, cousins and friends both here in the United States and Mexico. Riley is preceded in death by his great-grandparents, Marvin and Geneva Garvick, Kermit and Mildred Alfson, David Hernandez and Agripina Martinez; grandmother, Nora Hernandez Martinez, and great-uncle, Kermit Arden Alfson, Jr.
To order memorial trees or send flowers to the family in memory of Riley Mitchell Garvick, please visit our flower store.