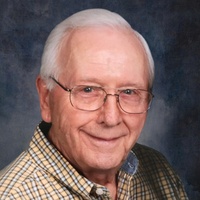 Richard Lamar Holmseth, 89, of Blue Earth passed away peacefully on Sunday, November 17 at Oaklawn Nursing home in Mankato, MN. A funeral service will be at 11am Thursday November 21 at Trinity Lutheran Church in Blue Earth with Rev. Dr. Jeanette Bidne officiating. Visitation will be Wednesday November 20 from 5-7pm at Patton Funeral Home and continue one hour prior to the service. Burial will be at Riverside Cemetery Blue Earth.

Richard (Dick) L. Holmseth was born October 28, 1930, the son of Lawrene and Alma (Silrum) Holmseth in Rome Township, Faribault County. At a very young age his mother Alma passed away, and Lawrence married Clara Henderson who raised the children as her own. He attended a small country school and graduated from Frost High School in 1949.  Dick went off to serve in the United States Navy in March of 1950 where he spent 4 dedicated years of service to his country. Throughout his 4 years as an Electrician's Mate 3rd Class he spent time on many ships like the USS Grand Canyon and crossed the ocean 50 time carrying troops back and forth. He received many Letters of Commendation for his service and received an Honorable Discharge in March of 1954.

After the military, Dick spent time working in the Taconite Mines in North Minnesota, worked for the Faribault County Highway Department and did custom corn shelling. Dick also loved his 30 years he spent farming the land, and most recently his 8 years of driving Prairie Express Bus where he retired in 2009.

On November 11, 1995 Dick married Mavis (Arends). They spent 24 amazing years together where they enjoyed fishing, camping, and most importantly they cherished the time they spent together and with family and friends.

Dick was a devoted husband, father, grandfather and great grandfather.  He was a practical joker, a storyteller, enjoyed making people laugh, and McDonalds coffee hour with the boys. His whit, sincerity, and everlasting love will be missed dearly by everyone.

He was a member of Trinity Lutheran Church, the Blue Earth VFW and the American Legion

To order memorial trees or send flowers to the family in memory of Richard "Dick" Holmseth, please visit our flower store.