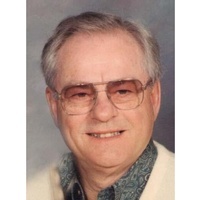 Richard “Dick” Henry Dummer, age 80, of Blue Earth, completed his earthly journey and passed peacefully into the open arms of Jesus on December 4, 2017.  Dick was born August 6, 1937, the 5th of 10 children, to Edward and Gertrude (Posl) Dummer.  Dick enjoyed growing up on the family farm near Bird Island, MN and remained a farmer at heart throughout his years. Dick attended St. Mary’s Catholic School in Bird Island, graduating in 1955.  After graduation he worked at the Farmers Elevators in Hector, Annandale, and Bird Island.  In 1961 Dick met Beverly Bartes and the two were married on June 29, 1963 at St. Aloysius Catholic Church in Olivia, MN.  Together they raised 2 daughters, Michele Catherine and Melinda Ann.  They lived in Bird Island until 1965 and then made the move to Morgan for 1 year.  In 1966 Dick became the general manager of the Sanborn Farmers Elevator, also serving as mayor and volunteer fireman for many years.  In 1977 he became the general manager of the Blue Earth Frost Farmers Elevator and continued in that position until his retirement in 1999.  During this time, he held many positions on elevator boards and Corn Plus. Dick was actively involved in his church community of Sts. Peter & Paul, serving as usher, choir member, eucharistic minister, and member of the Knights of Columbus.  He was also involved in his community, volunteering many hours with Christmas Wonderland, and serving on the First Bank Board of Directors for 30 years. The joy of Dick’s life were his four grandchildren:  Courtney, Evan, Jennifer, and Lauren.  What special times they shared together and many an interesting lesson learned by hanging out with Gramps!  He enjoyed being actively involved in all their sports and music activities.  Also keeping Dick busy were his golfing, fishing trips, and gardening, along with the trips he and Bev took with special friends.  He was always busy doing something!  Dick will be missed by family and friends for his quick wit and humor that came so naturally for him. Waiting to rejoice with him again someday are his loving wife of 54 years, Beverly; proud daughters, Michele (Scott) Saunders of Suffolk, VA, and Melinda (Paul) Bogle of Austin, MN; his treasured grandchildren, Evan and Lauren Saunders, and Courtney and Jennifer Bogle; his sisters, Sister Mary Lou Dummer and Janice (Gary) Abraham; brothers, Jerry (Elaine), Roger (Donna), Eldon (Lee), Donnie, Eddie (Pat), and Doug (Chris); along with many nieces, nephews, and friends.  He was preceded in death by his parents and brother, Robert. Mass of Christian Burial will be at 11:00AM on Friday, December 8, 2017 at SS Peter & Paul Catholic Church with Fr. Peter Klein presiding.  Visitation will be from 5-7PM on Thursday, December 7 at Patton Funeral Home & Cremation Service and one hour prior to the service at the church.  Burial will take place immediately following the service at Calvary Catholic Cemetery, Blue Earth, MN.  Online condolences may be left at www.pattonfh.com.Memorials preferred to United Hands Hospice or SS Peter & Paul Catholic Church of Blue Earth, MN. Dick's Memorial Folder
To order memorial trees or send flowers to the family in memory of Richard "Dick" Henry Dummer, please visit our flower store.