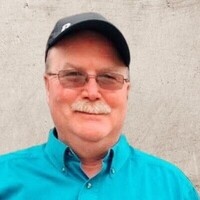 Rahn Greimann always said he wanted to leave this life while riding a horse, and God granted him that wish. While riding his horse on Thursday January 13th, Rahn experienced a brain aneurysm in the countryside near his home. He left this mortal world in the early hours on January 14th, 2022.

Rahn was born on October 31, 1959 to Wesley and Alberta Greimann. He was the youngest of four children. Growing up on a farm, he spent many hours outdoors and loved to play in the creek near his home.

He graduated from Blue Earth High School in 1978 and earned an associates degree from Mankato Technical College. He married his High School sweetheart, Michele (Shelly) Ankeny in 1979 and had two beautiful daughters Brianna and Makenzie.

Rahn combined his extensive printing and marketing background with his passion for horses and horsemanship into a National magazine he owns and publishes, titled Performance Horse Digest.

Faith and Family were first and foremost in Rahn’s life. As a member of the Church of Jesus Christ of Latter-Day Saints, Rahn spent countless hours serving and ministering to his congregation and any and every one he met.

Rahn was also active in his community and was instrumental in getting the Unity Trail put together in Blue Earth. He served as the Faribault County Trail Committee president for many years.

He is survived by his wife Shelly Greimann. His oldest daughter and her husband, Brianna & David Greer and their children, James, Clarine, Wesley, Elsa, Charlotte, William, Edmund and Mikaela. And his youngest daughter and her husband, Makenzie & Todd Bloomer and their children Tyler and Audrey. He is survived by his Mother, Alberta Greimann, and two sisters Leslie Hollowell, Lesa Johnson, and their families. He is preceded in death by his father Wesley and brother Scott Greimann.

To stream the memorial service online, go to: Pattonfh.com/obituary/rahn-greimann at 11am on Saturday January 22, 2022.

To order memorial trees or send flowers to the family in memory of Rahn Greimann, please visit our flower store.