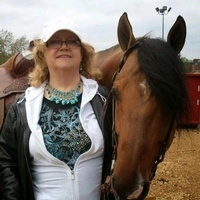 Paula Marie Willette (Hanisch), age 63, of Blue Earth, passed away peacefully on Friday, October 27, 2017 at the Methodist Hospital in Rochester.  Visitation will be from 4-7PM on Friday, November 3 at Patton Funeral Home and Cremation Service with a brief prayer service beginning at 5PM with President Brian Jeppson presiding.  Online condolences may be left at www.pattonfh.com. Paula was born on December 4, 1953 to Dr. Edward and Ruth Hanisch in Little Rock, Arkansas. Paula and her folks relocated several times throughout her childhood before settling in Bloomington, MN where she graduated from Bloomington Jefferson high school.  She met the love of her life, Steve in high school.  They were united in marriage on August 16, 1975.  The two settled in Faribault County to raise their boys and share their love and passion for horses.  Paula was a caring and compassionate woman which led her to a career in the nursing field for over forty years.  She worked as an LPN and later went on to receive a degree as a Registered Nurse.  Paula retired from Community Behavioral Health Hospital – St. Peter, as a psychiatric nurse. Paula volunteered her time as a 4H leader.  She was involved in most horse related projects through 4H, such as, Horseless Project, teaching young folk about horses and Horsebowl.  Paula was very dedicated in the horse community. Paula is survived by her loving husband of 42 years, Steve Willette; sons, Jason (Sarah) and Eric (Alicia); grandchildren, Zayden, Jaycee, and one on the way; mother, Ruth; brother, Russ; and many other loving relatives, friends, and great many pets. Paula is preceded in death by her father, Dr. Edward Hanisch.
To order memorial trees or send flowers to the family in memory of Paula Marie Willette, please visit our flower store.