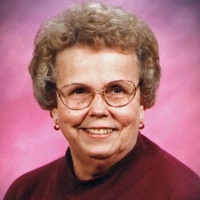 Natalie Kate (Mueller) Hunt, 89, of Blue Earth, went to be with her Lord on Thanksgiving Day, Thursday, Nov. 22. Funeral service will be 10:30 a.m. Wednesday, Nov. 28, 2018 at Bloomington Lutheran Church, 9350 Portland Ave. S., Bloomington with Pastor Scott Spaulding officiating. Burial will be at Fort Snelling National Cemetery. Visitation will be one hour prior to the service. Natalie was born in Witoka (near Winona), on May 29, 1929, the 10th of 11 children born to Adolph and Kate Mueller. She grew up on the family farm and graduated from Winona High School and attended Dr. Martin Luther College in New Ulm. In 1949 she moved to San Diego, California, where she met a U.S. Navy submarine sailor, Charles "Chuck" Hunt. They married in March of 1950. Chuck and Natalie were blessed with four sons; Charles (Chuck), Randall (Randy), William (Bill) and Timothy (Tim). Natalie was often a "single mom" as her husband went on six-month long sea duties during their marriage. The family lived in the San Diego area until 1964 when they moved to Denver, then Aurora, Colorado, where her husband was a Navy recruiter. In 1968, the family moved back to Natalie's home state of Minnesota, where they made their home in Bloomington.  Natalie worked for the Owens Corporation as an office manager. She then became co-owner of Vinyl Sash Windows and Great Lake Products with her husband and son Bill. They retired in 1991 and moved to their lake home on Lake Volney near Le Center. After her husband's death in 1992, Natalie eventually moved to Brillion, Wisconsin, in 1999, to be near her son, Tim and family. In 2014, Natalie moved to Blue Earth, where she was first a resident of Southview Estates, then Friendship Court, and finally Moonlight Lane, all at St. Luke's Lutheran Care Center. Natalie was always very active in all the different Lutheran churches she was a member of over her years. She was also active in politics, and worked on several campaigns, including for Sen. Dave Durenberger. But most important to her was her family, all who will miss her very much. Natalie is survived by her sons: Chuck (Pam) of Blue Earth and their children, Nate (Sue) Hunt, Nick (Karmen) Hunt, Katy (Wade) Volk; Randy (Shirley) of Appleton, Wisconsin and their children, Phil (Kelly) Hunt, Tom (Rachel) Hunt; Sonya (Nate) Krake, Cory (Amanda) Grassell; Bill of Clear Lake, Wisconsin and his children, Valerie (Rob) Newman, Matt Hunt, Tyler Hunt; and the late Tim and his children, Alex (Melissa) Hunt, Jenny Hunt, Emily Hunt and Carrie Hunt; two sisters, Dorothy Lau, of Eau Claire, Wisconsin and Alice Klawiter, of Winona; two sisters-in-law, Dorothy Mueller and Mary Mueller of Winona; 21 great-grandchildren; many nephews and nieces; and countless friends from across the country. She was preceded in death by her husband, Chuck, her parents, Adolph and Kate, her parents-in-law, Richard and Carrie Hunt, brothers David, Pete, Alfred, Marvin, Robert, Herbert, sisters Lula, Clara, and her beloved son, Tim.
To order memorial trees or send flowers to the family in memory of Natalie Kate Hunt, please visit our flower store.