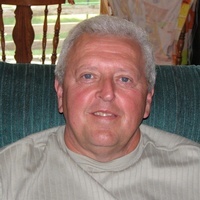 Merlin "Merle" Gene Larson suddenly passed away on Saturday, January 19, 2019 at the age of 67. Visitation will be Friday, January 25, 2019 from 5-7 PM at Patton Funeral Home where a memorial service will be held on Saturday at 2 PM with Rev. Brent A. Walker officiating. Additional visitation one hour prior. Patton Funeral Home is entrusted with arrangements. www.PattonFH.com

Merle was born January 23, 1951 in Blue Earth to Curtis Lawrence and Alice May (Kienitz) Larson. He was raised and educated in Blue Earth, graduating from Blue Earth High School in 1969. Merle served his country in the Army National Guard from 1970- 1977.  On August 15, 1970, he married Paulette Mae Hanevik at United Lutheran Church in Frost. They were blessed with a son, Gary.  Merle was employed for the past 30 years by Darling International, in Blue Earth until the time of his death.

He will be remembered for having the best contagious laugh and always being there to help out a friend. Merle loved his family, especially his son and grandchildren. His love of fishing, snowmobiling and motorcycles, trips to Duluth and Lake Superior will be memories treasured forever. His eye for photographing flowers and the birds of the neighborhood are not to be forgotten.

The “Good Old Larson Stubbornness” is a trait that may or may not be transferred to his friends and family.

Merle will be greatly missed by his wife, Paulette Larson of Blue Earth; son Gary (Amanda) of Montrose; grandchildren, Grayson, Charlize and Callum Larson; brother, Robert Larson of Blue Earth and many other relatives and friends too numerous to list.

Preceding him in death are his precious granddaughter, Emory Rose Larson; his father, Curtis; mother and stepfather, Alice and Lawrence Golay; brother Larry Larson and parents-in-law, Berner and Lauretta Hanevik.

To order memorial trees or send flowers to the family in memory of Merlin "Merle" Gene Larson, please visit our flower store.