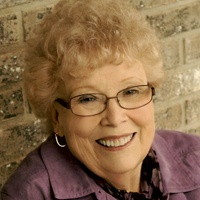 Funeral services will be held at 10:30am on Saturday, February 19, 2022 at Community Chapel in Lakota Iowa. A time for visitation will be held from 5-7pm on Friday, Feb. 18 at Cornerstone Evangelical Free Church in Blue Earth, and one hour prior to the service in Iowa. Burial will take place at Maple Hill Cemetery in Lakota.

Mary Ann Tvedten was born September 4, 1934 to Ole and Odella Tvedten in rural Pilot Grove, MN.  She was welcomed by her brother Ernie, her sister Angie and a host of Norwegian neighbors and friends.  Little brother Lenny joined the family ten years later. She went to country school through 8th grade then transferred to Elmore High School where she graduated in 1952.  In August 1951 she met Jenifer Bosma, a young man from Lakota, at Ankeny’s Skating Rink and they’ve been a couple for 70 years. Mary Ann worked in the Faribault County Recorder’s Office and for Skelgas in Blue Earth before her marriage to Jenifer on October 11th, 1953.  They celebrated their 68th anniversary last fall. They lived and farmed for forty years south of Lakota and were blessed with three children, Scott, Lorrie and Brian. In 1994 they built their retirement home and moved to Blue Earth. Mary Ann worked together with Jenifer on the farm and raising the kids, going back to work when they grew up.  She worked at Fischer Drug in Elmore, Miller Pharmacy in Buffalo Center and Renae’s Fabric in Blue Earth.  She was also very active in her church teaching Sunday School, Bible School, youth group sponsors, choir member, Maranatha ladies group and more. In between her busy schedule she loved to sew and craft and bake – the coffee pot was always on! She and Jenifer were charter members of Community Chapel Church in Lakota. Mary Ann enjoyed volunteering at KJLY Christian Radio Station in Blue Earth. She accepted Jesus as her Savior at a young age and this was her strength all of her life. Her family was always a high priority to her.

To order memorial trees or send flowers to the family in memory of Mary Ann Bosma, please visit our flower store.