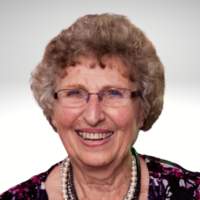 Marian Bell, 90, passed away Monday, May 10th, 2021 at home in Blue Earth following a brief illness.  A funeral service will be held at 2:00 p.m. Friday, May 14, at St. Paul’s Lutheran Church in Blue Earth followed by burial at Riverside Cemetery. Coffee and cake will be served at Patton Funeral Home.  Visitation will be at the church from 4:00-7:00 p.m. on Thursday, May 13.  Online condolences can be left at www.pattonfh.com.

Marian Viola Bell was born October 19, 1930 in Guckeen, Minnesota, the daughter of Herbert and Margaret (Andrews) Schaal.   She graduated from Blue Earth High School.  She was united in marriage to Norman Bell on June 4, 1950 in Blue Earth where they farmed together for over 50 years until Norman’s passing in 2007.  She was a lifelong member of St. Paul’s Lutheran Church where she was baptized, confirmed and married.

Marian will be fondly remembered by family and friends for her selfless commitment to her church and community groups.  She enjoyed her time volunteering at the gift shop at United Hospital District.  As an avid quilter, she was a member of Blue Earth Valley Quilters and Mainstreet Sewing Society, donating numerous quilts she created to Quilts of Valor.  Marian was an avid gardener and spent her summers working in her flower beds.  She was known for her beautiful cakes, which she created professionally for over 20 years, and then for family right up until her passing.   Marian especially loved her role as grandmother and great grandmother and always had a steady supply of homemade cookies ready for them when they visited.

She was preceded in death by her husband Norman; parents, Herbert and Margaret Schaal, Sr. and brother Herbert Schaal Jr.

In lieu of flowers, memorials may be directed to UHD Hospice in Blue Earth.  The family extends thanks and appreciation to the caregivers at St. Croix Hospice who lovingly cared for Marian in her final days.

To order memorial trees or send flowers to the family in memory of Marian Bell, please visit our flower store.