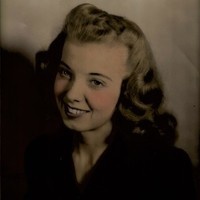 Lorene M. Dray passed away on January 31, 2020 at the St. Luke's Lutheran Care Center in Blue Earth. She was 95.
Visitation will be from 9-11 am on Wednesday February 5, 2020 with a funeral service at Shiloh Lutheran Church in Elmore. Reverend Robert Roettger officiating. Interment will follow at Riverview Cemetery in Elmore. Patton Funeral Home is entrusted with arrangements. www.PattonFH.com

Minnie Lorene Hove was born June 27th, 1924 to Andrew and Minnie (Thompson) Hove on the family farm near Randall, Iowa. She was baptized at the Elim Lutheran Church in Randall, Iowa. Lorene had many early childhood memories in that area since both sets of grandparents had settled there after coming from Norway. Education started early when at age 5 she walked to the pink schoolhouse down the road. All too soon her father announced that they would be moving north to a new home, church, school and state in Minnesota. To Lorene it seemed like the edge of the earth. Now living between Elmore and Rake, on the state line road, she loved going to her country school. Lorene had vivid memories of hearing the Meadow Lark sing his beautiful flute like warble as she walked along.

Life changed with WWII when she stayed home to help out on the family farm. Already familiar with the John Deere tractor, Lorene helped her Dad in the fields and her Mother with her hundreds of chickens. Education became correspondence with American High School of Chicago, IL. Lorene attended the winter term at Lutheran Bible Institute (LBI). Meanwhile, her family moved to Elmore where she became a secretary and bookkeeper at the Elmore Concrete and Tile Company. During this time, a young GI returning from Europe saw a photo of a young gal back in Minnesota that made his heart skip a beat. Back home, he wasted no time locating her and winning her heart. Enter Daird Dray, Lorene’s future husband. Lorene and Daird were united in holy matrimony at Shiloh Lutheran Church on March 25, 1948. Their union was blessed with three children, Mark, Timothy and Elizabeth. After several years, Lorene began working as a postal clerk, then officer in charge, and finally as a Postmaster. At one point, she worked at three offices in a day. She retired from the Postal Service in 1985.

Her greatest joys in life were her Lord, her husband, her children, grandchildren, great grandchildren and family. Another significant joy was her music, primarily as an organist. This began at Liberty Lutheran Church in Rake, Iowa and continued for many years at Shiloh Lutheran Church in Elmore, MN. Her faith started early when she realized her need for God’s Love and direction. She walked with the Lord throughout her life and now rests within his loving arms.

She was preceded in death by her husband, parents, 3 brothers and 1 sister.

To order memorial trees or send flowers to the family in memory of Lorene Dray, please visit our flower store.