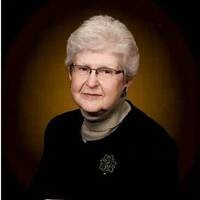 Laurel Mathews, age 85 of Blue Earth passed away peacefully at her home Sunday January 9, 2022. A funeral service will be held Thursday January 13, 11AM at St. Paul Lutheran Church in Blue Earth with Rev. Matthew Lorfeld officiating. Visitation will be Wednesday 5-7PM at Patton Funeral Home and continue one hour before the service at the church. Burial will be at Riverside Cemetery. Online condolences can be left and a livestreaming of the service can be viewed at www.pattonfh.com

Laurel Naomi was born May 21, 1936 to Anfin and Georgina (Larson) Halvorson in Rake, IA. She was one of five children. She was baptized September 4, 1936 and right after she was baptized the family went to Norway for a year. She was confirmed June 10, 1951 at the North Blue Earth Lutheran Church, attended country school and graduated from Wells in 1954. She was well known for her angelic singing voice and ability to play the organ. On August 3, 1958, she married the love of her life, Arno Mathews. Together they worked on the farm, raised hogs, cattle, chickens, elk as well as several other strays that Arno brought home. Most importantly, they raised a family of three children together. Laurel’s world revolved around that family and the families they would have. She enjoyed cooking, baking and canning. Frequent shopping trips and thrifting also made her happy but traveling with Arno to Hawaii, Alaska and Florida to name a few places always were dear to her heart. She also served on and attended different committees at St. Paul’s.

She is preceded in death by her parents, her husband Arno, brothers Harland (Millie) Halvorson and Terry Halvorson, sisters Rose (Allan) Faleide and Jeannine (Robert) Kitson.

To order memorial trees or send flowers to the family in memory of Laurel Mathews, please visit our flower store.