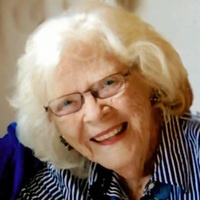 June Vivian Scheid, age 95, passed away on Thursday, February 27, 2020 at her home surrounded by her family.

A celebration of life service for June will be held at 11AM Wednesday, March 4, 2020 at Hope United Methodist Church, Blue Earth, MN, with Pastor Russ Jacobsen officiating.  Visitation will be held from 5-7PM on Tuesday, March 3 at Patton Funeral Home and Cremation Service.  A visitation will also take place one hour prior to the service at the church.  Interment will be at Rice Lake Cemetery. Online condolences may be left at www.pattonfh.com.

June was born in Appleton, WI on June 24, 1924, the only child of Lloyd and Vernice (Stillman) Fumal.  She attended Appleton High School. June also attended two years at the University of Wisconsin, Madison. On April 6, 1946, June married the love of her life, Donald Roy Scheid, at the Trinity Lutheran Church in Appleton.  June and Don moved back to Delavan to work the family farm and raise four children. The couple was married 71 years when Don passed away in 2017. June lived on the family farm the rest of her life.

She was active in the Order of the Eastern Star, 4-H, church, school, and her community. June was also a founder of Job’s Daughters Bethel #82 in Blue Earth and was a lifelong member of the American Legion Auxiliary. She also belonged to the Degree of Honor Protective Association and was a member of the local book club.

June enjoyed square and round dancing, swimming, horseback riding, boating, winters in Florida, and summers at the cabin. Most of all, June enjoyed spending time with her family.

June is preceded in death by her daughter, Kathryn Sakal; husband, Don; and her parents, Lloyd and Vernice Fumal.

To order memorial trees or send flowers to the family in memory of June Vivian Scheid, please visit our flower store.