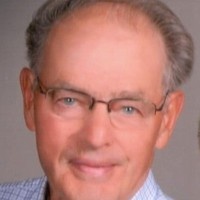 John Charles Stewart, 79, passed away Thursday October 3, 2019. A funeral service will be held Saturday October 12 at Shiloh Lutheran Church in Elmore at 2pm with Rev. Robert Roettger officiating. Visitation will be Friday October 11 from 5-7pm at Patton Funeral Home in Blue Earth and will continue one hour prior to the service at the church. Burial will be at Riverview Cemetery in Elmore.

John was born on June 22, 1940 to John and Lygia (Steuer) Stewart on their family farm in Pilot Grove Township, MN. He attended country school and later attended Elmore High School where he participated in football, basketball and track. He graduated in 1958 and went on to attend Ag School at the University of Minnesota. John returned to the family farm in 1961.

John married his high school sweetheart and the love of h is life, Marilyn Viland on August 19, 1961 at East Chain Lutheran Church. This union was blessed with a son, Todd and a daughter, Natalie.

Everyone who encountered John knew he was a “gentle man”. He was a kind, caring, loving, faithful servant of God. John loved his family! He and his family shared many great adventures and thousands of memorable moments.

He was an active member of Shiloh Lutheran Church in Elmore, he served on the board of Elmore Public Schools and Frost Benco Electric Board. He loved hunting and fishing with his friends and family. He especially enjoyed fishing on Lake Winnibigoshish, and he knew where all the “holes” were so he could ensure his grandchildren would catch a fish! He loved farming, doing Sodoku puzzles and the many friends who they wintered in Arizona with.

John is preceded in death by his parents, brothers Robert and Harry, sister Elaine (Don) Hoppe and his parents-in-law, Orville and Flossie Viland.

His family and friends were all BLESSED to have John in their lives.

John Stewart was a much-loved man. His faith, family and friends were the most important things in the world to him. He will be missed greatly by all who knew him.

To order memorial trees or send flowers to the family in memory of John Charles Stewart, please visit our flower store.