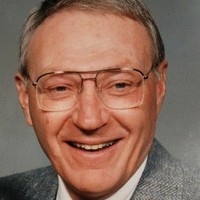 John Charles Plocker was born November 1, 1926 in Blue Earth, Minnesota to Walter and Hilda Plocker.  He was raised on the family farm and helped in the usual farming activities.  At Blue Earth High School, he participated in football, basketball, and the Mah-Ko-Tah yearbook, and was known as “Mr. Positive.”  He graduated in 1944.  He enlisted in the Navy and attended Gustavus-Adolphus briefly for a naval training program.  After a brief stint in the service, he attended Iowa State University in Ames, Iowa, where he earned a degree in Animal Husbandry in 1948.  John then taught Agriculture in Granite Falls, MN, where he met Anna Rosella Lein, also a teacher in the school.  He was called back to the Navy and entered the pilot training program in Texas and Florida.  He “earned his wings,” and flew and landed fighter jets on the Naval aircraft carriers off the coast of Florida.

He was secretly married to Rosie (military officers could not be married at the time), and then “legally” married on December 24, 1950.  After his service in the Navy, they returned to Blue Earth where they began farming southwest of town on the family acreage.  In addition to raising hogs and crops, he operated a hog equipment business.  John was active in many local groups, including the Blue Earth school board, rural electric association board, elevator board, Lions’ Club, and American Legion.  He also served on the Minnesota State Board of Education and the Minnesota State Elevator Board.  John was a lifelong, active member of the First Presbyterian Church in Blue Earth.

John and Rosie took frequent trips throughout the United States, often taking Elderhostel classes at their destinations to learn more about the area and its history.  They also enjoyed attending the activities of their son and grandsons and all of the local community concerts, plays, and events.

He is survived by his son Tom (Becky) Plocker of Blue Earth, grandsons Daniel (Minneapolis, MN) and Steven (Gainesville, FL), and ten nieces and nephews.  John was preceded in death by his parents, sisters Lucille and Helen, and wife Rosie.  Memorials are requested to St. Luke’s Lutheran Care Center or First Presbyterian Church of Blue Earth.

To order memorial trees or send flowers to the family in memory of John Charles Plocker, please visit our flower store.