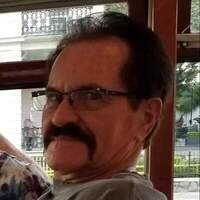 John Michael Ellis, age 69, of Armstrong IA, passed away peacefully on Tuesday, September 14, 2021 at the Avera Heart Hospital in Sioux Falls SD.  A Memorial Visitation will be held on Thursday, September 23, 2021 from 4-7 PM at Patton Funeral Home in Blue Earth MN.  No service will be held at this time. Patton Funeral Home is entrusted with arrangements. www.PattonFH.com

John Ellis was born on August 8th, 1952, to Roger and Peggy Ellis. He graduated from Blue Earth High School in 1970. On August 9th, 1970, he married the love of his life Ruthanne Lyon. John started working in the meat department of the local grocery store in Blue Earth which led to him owning several Meat Lockers throughout his years up to death.

Much of his free time was spent riding his Harley motorcycles, working on his many hot rods, and spending time with family and friends.

He was a very loving and devoted husband, father, and grandfather. Those are whom he held closest to his heart. John is survived by his wife Ruthanne Ellis of 51 years, his daughter Jackie Ellis, son-in-law Justin Ellis and two grandchildren Mikol Ellis & Kaylee Ellis; Another daughter Tracy Williams and grandchildren.  Siblings: Kathi (Tim) Peterson, Colleen (Jerry) Boran, Sue (Ray) Milligan and Chris Manno, Robert (Michelle) Ellis; as well as many cousins and friends.

He is preceded in death by his parents Roger and Peggy Ellis, parents-in-law Howard and Darlene Lyon, brother-in-law Michael Manno, and oldest sister Kayla Kuhlman.

To order memorial trees or send flowers to the family in memory of John Michael Ellis, please visit our flower store.