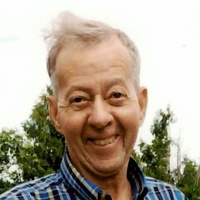 John William Brooks, age 80 of Bricelyn, passed away unexpectedly in an automobile accident on Tuesday, June 21, 2022. Private family services will be held at Patton Funeral Home in Blue Earth.

John was born on June 21, 1942 in Brush Creek Township to Orville and Florence (Kermeen) Brooks. He attended Frost High School, graduating in 1961. John was a lifelong farmer. He was previously a member of Dell Lutheran Church and was very strong in his faith.

John enjoyed spending his time working outdoors at home. He also loved storytelling and sharing memories with his brothers. John was always smiling, and had a special twinkle in his eyes. He was tender hearted and accepting of everyone. John will be missed.

He is preceded in death by his parents and infant brother, Lawrence.

To order memorial trees or send flowers to the family in memory of John William Brooks, please visit our flower store.