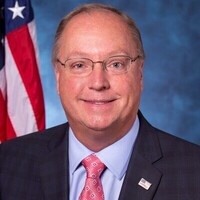 United States Congressman of Minnesota’s First District Jim Hagedorn passed away on February 17, 2022 at the age of 59.

Funeral services honoring Jim’s life and legacy will be held privately. He will be buried at Riverside Cemetery in Blue Earth. The public is invited to a time for visitation on Friday, March 4, 2022 from 5pm-7pm at Patton Funeral Home, and on Saturday, March 5, 2022 from 9am-12pm at St. Paul’s Lutheran Church in Truman, Minnesota.

Jim was born in Blue Earth, Minnesota on August 4, 1962, the first son of Tom Hagedorn and Kathy Mittelstadt Kreklau. He was raised on the family farm in Truman and attended St. Paul’s Lutheran School. He later went on to receive his Bachelor of Arts in Government and Political Science from George Mason University in 1993.  Jim was an avid sports fan loyally supporting the Minnesota Vikings, Pittsburgh Penguins, Minnesota Twins and ultimately the Syracuse Orange.

He served as a legislative aide to U.S. Representative Arlan Stangeland from 1984 to 1991. He then worked in the United States Department of the Treasury as director for legislative and public affairs for the Financial Management Service from 1991 to 1998 and as congressional affairs officer for the Bureau of Engraving and Printing until 2009.

Congressman Hagedorn was first elected in 2018 and made history when he successfully flipped a long-held Democratic seat from blue to red during a challenging midterm cycle.  He was re-elected in 2020 to serve a second term, strengthening his support in the district.

Serving in Congress, representing the people of southern Minnesota was a life-long dream of Jim’s. Once elected to the U.S. House of Representatives, Jim quickly focused his attention on the priorities of the district: agriculture, small business, transportation, and the area’s world class health care system.

Having three generations of farming preceding him and growing up on the family farm in Truman engrained a deep appreciation for agriculture. During his first term in office, Jim pushed relentlessly for passage of the USMCA and protecting the region’s international trade priorities. He went on to be a strong proponent for agriculture and its impact on rural communities, focusing his energies on providing relief for biofuels facilities, building out reliable broadband networks, and enabling higher line speeds for pork processing. His experiences and work motivated him to sustain farming and protect southern Minnesota’s way of life.

For nearly 50 years, promises were made to residents regarding the completion of the Highway 14 Corridor project. Seeking to honor these promises, Jim worked to bring federal, state, and local officials together and successfully secured a grant to complete the last stretch of the four-lane expansion from Nicollet to New Ulm. The completion of the corridor will leave a lasting legacy for the area and improve safety and create greater economic opportunity for the region. Moreover, Jim used his time in Congress to champion for real infrastructure projects, including the successful revitalization of the Rochester International Airport and other area airports, and the improvement of shortline railroad service in southwestern Minnesota.

Jim was always attuned and responsive to the needs of the local economy. He used his platform on the House Small Business Committee to seek relief for small businesses during government-imposed lock downs. Moreover, his passion was for expanding incentives and encouraging career and technical education opportunities.

During his time in Congress, Jim served as a conservative populist, fusing the modern sensibilities of Trump-era policies with the traditional conservatism of his political hero, Ronald Reagan. Jim made no apologies for being a conservative in Congress. He advocated tirelessly for fair tax policy, American energy independence, Peace Through Strength foreign policy, secure borders, the Second Amendment, and pro-life values.

In his last action as a member, he raised concerns about the fiscal trajectory of our nation, introducing a measure to display a national debt clock on the floor of the U.S. House of Representatives. He sought to bring greater transparency to the American people while reminding other members of the path our nation is on unless we take aggressive action.

In lieu of flowers, donations can be made to a charity of the donor’s choice, in Jim’s name.

There are no gallery images.

To order memorial trees or send flowers to the family in memory of Congressman Jim Hagedorn, please visit our flower store.