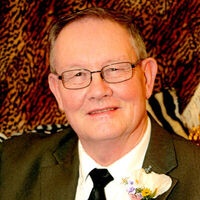 Jeffrey Lee Loge, age 73 of Frost, beloved husband, father, grandpa and friend passed away on Saturday, September 17, 2022 with his family surrounding him. Memorial services will be held at 11 AM on Friday, September 23, 2022 at United Lutheran Church in Frost. Time for visitation will be held from 4-6 PM on Thursday, September 22 at Patton Funeral Home in Blue Earth and one hour prior to the service at church.

Jeff was born on March 11, 1949 in Blue Earth to Lee and Inez (Helmke) Loge.  Jeff grew up on the family farm in Frost, was confirmed at Shiloh Lutheran Church in Elmore and he graduated from Frost High School in 1967.  While in High School, Jeff was involved in many activities and athletics, but basketball was his passion.  Jeff set a Frost High School and Boarder League single-game point total record with 44 against Kiester in 1967, during his senior year.  Following High School, Jeff attended Waldorf University in Forest City, IA where he continued his education was a two-year letter winner as part of the men’s basketball program.

In 1969, Jeff married Patricia Fenske and they welcomed their first son, Scott.  The same year, he graduated from Waldorf with an education degree and that fall he started his teaching career in Ledyard, IA where he taught history and was also the boys basketball coach.  In 1975, Jeff and Patricia had their second son, Mark.  Jeff taught and coached at Ledyard High School until 1976, when he and the family moved back to the family farm in Frost.

Jeff began farming in 1976, which further fueled his lifelong passion for farming, agriculture and way of life.  In 1979, Jeff and Patricia had their third son, Jon.  Jeff and Patricia later divorced, and Jeff remarried Susan Daniels on February 12, 2016.  The couple joined their families and together shared five children.

Many will remember Jeff for his quick wit, sarcasm and sense of humor.  He was an avid sports fan; rarely missing a Gopher, Viking, or North Star/Wild game and always reading about it in the Star Tribune in the following day’s newspaper.  He also enjoyed pushing himself and continue to learn and improve.  Jeff maintained his sobriety for 37+ years.  He also returned to college and earned his Master’s in Social Work from Mankato State University from which he was a counselor and social worker for different organizations across southcentral MN.  Jeff worked as a commodity broker in Fairmont before earning his Series 7 license and other certifications to open his own office location in Frost.

Jeff enjoyed gardening, mowing the lawn and partaking in events with family and friends. He looked forward to getaways with Susan and taking trips to learn more about history – Washington D.C., Gettysburg, Pearl Harbor, etc.  Jeff appreciated getting together with his friends to discuss the crops, weather, horseracing or local sports teams.  But most of all, Jeff loved his children and grandchildren.  Hosting annual March Madness sleepovers, opening the Frost gym to allow the grandkids to play and sending a text or calling them to get the inside scoop on their upcoming season or next opponent. He was a faithful and devoted father and grandpa.

Special thank you for the care provided to Jeff by Dr. Aaron Johnson and the UHD hospice staff.

To order memorial trees or send flowers to the family in memory of Jeff Loge, please visit our flower store.