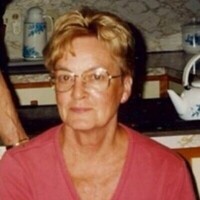 Jeannine Virginia Fisher, age 79 of Blue Earth passed away at her residence Saturday June 20, 2020. Visitation will be held at Patton funeral Home and Cremation in Blue Earth on Monday June 29, 2020 from 4:00-6:00pm.

Jeannine was born on September 20, 1940 in St. Louis Park, Minnesota to Frank and Virginia (Reider) Dreyer. Jeannine graduated from St. Louis Park High School in 1957. On May 21, 1960 Jeannine married Keith Fisher in Minneapolis. They were blessed with two sons and a daughter. While living in New Hope from 1964-1978, the couple were a part of a softball team called the “Deca-Dandies”, they made many friends and memories in this as well as bridge clubs and many neighborhood get togethers. She also enjoyed China painting. In 1981 they moved to Blue Earth where Jeannine worked at Telex until she retired. When the couple moved into town, the story goes that Keith was digging in the back yard one day and came upon a gold $2.50 coin. Thinking that there may be more buried treasure, he kept digging deeper and wider. With nothing more to be found and the yard with a giant hole in it, they decided to put in an underground pool. This became their place of relaxation and where Jeannine was able to focus on her love of flowers, growing over 200 varieties, this passion was lifelong, and she always had a beautiful garden at every place they lived. Jeannine also enjoyed listening to music by The Carpenters, watching the Minnesota Twins and Minnesota Wild sports teams. She also enjoyed trap shooting and was known as a very good shot.

She is preceded in death by her husband Keith, her parents, son Mark and brother Gary.

To order memorial trees or send flowers to the family in memory of Jeannine Virginia Fisher, please visit our flower store.