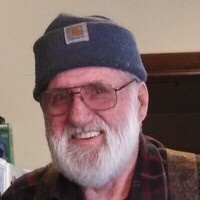 James “Jim” Orville Petersen, age 79 of Blue Earth, formerly Albert Lea, passed away unexpectedly at home February 28, 2021. A memorial service will be held Saturday March 13 at 10:30 at the Community Covenant Church in Huntley with Rev. Rodney Yates officiating. Visitation will be Friday March 12 from 4-7pm at Patton Funeral Home. Burial will be at the Alden Cemetery. Online condolences can be left at www.pattonfh.com

James was born on May 19, 1941 in Beauford, MN to Orville and Dorothy (Emery) Petersen. He grew up in rural Winnebago, MN and attended Winnebago school, then enlisted in the US Army, where he was later honorably discharged.

Throughout his life, he worked at several places including Loveall Construction, drove truck for Espeland & Butler Farms and other odd jobs. He enjoyed camping, having “coffee” with the guys, fishing, tinkering on lawnmowers, especially “Cubby”, going for a drive to see nature and doing word search puzzle books, woodworking, music and he loved his flannel. If he was able, he tried to help anyone he could and was often mistaken for Santa while out and about. He was a member of the American Legion Post #56 in Albert Lea.

Jim is preceded in death by his wife Gloria (2008), sons Jerry and Jason Petersen, daughter Nichelle Petersen, sisters Sheila, Diana, Janet, Susan and Carol, brothers Gary, Barry, William, Mark and Sheldon and his parents. At this time, memorials can be sent to Patton Funeral Home for the family.

To order memorial trees or send flowers to the family in memory of James Petersen, please visit our flower store.