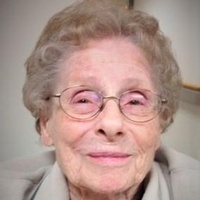 Irene Hodgdon, age 99, of Blue Earth, passed away Tuesday, April 23, 2019, at St. Luke’s Lutheran Care Center. Funeral services will be held on Saturday, April 27, 2019, at 11:00 AM, at Trinity Lutheran Church in Blue Earth, with Rev. Jeanette J. Bidne officiating. Visitation will be from 9:00 AM-11:00 AM before the service at the church.  Burial will be in Riverside Cemetery, Blue Earth, Minnesota. Web tributes may be left at www.pattonfh.com Irene Marion Davis was born November 26, 1919 on a farm in Pickwick Valley, MN, daughter of George and Louise (Braatz) Davis. She was baptized in January of 1920 and confirmed March 25, 1934.  She was a graduate of Winona High School, Winona Teacher’s College and a post graduate of Mankato State University.  Mrs. Hodgdon taught Rural Schools in Winona County, was employed in the County Superintendent’s Office and was a Winona County Social Case Worker.  She taught in the Blue Earth School System for 20 years, then continued as a substitute teacher for 15 years.  She was a dedicated volunteer of various things in the school for many more years.  She was a Life Member of Minnesota Education Association and in 1977, she organized the Blue Earth Retirees. Irene was active in the life of the Trinity Lutheran Church, having served in the Sunday School, Bible School, Release Time classes, the Council, several offices in the TLCW and on church committees.  She was a fixture for many years at the Trinity Fair Stand, a volunteer at St. Luke’s, Interfaith Caregivers, Red Cross Blood Bank and active in RSVP.  Irene held memberships in the Faribault Historical Society, the American Cancer Society and Pickwick Mill, Inc. Mrs. Hodgdon and her husband Clinton, whom she married in 1948, resided in several locations in Minnesota, but lived in Blue Earth since 1956.  Clinton passed away in 1986.  In 2013, after a head injury, Irene lived in the Adams Care Center in Adams, MN, until she was later transferred to St. Luke’s Lutheran Care Center in Blue Earth.  Her bright smile, wit, deep faith and concern for others was evident to all she encountered, even throughout her final years. Irene is survived by her son; Alfred (Sharon) Hodgdon of Leroy, MN, daughter; Ellen Shannon of Marietta, GA; three grandchildren, three step grandchildren, two great grandchildren and two step great grandchildren.  She was preceded in death by her parents, husband, sister, brother, stepson, nieces and nephews. In lieu of flowers, memorials are preferred to Trinity Lutheran Church or St. Luke’s Lutheran Care Center.
To order memorial trees or send flowers to the family in memory of Irene Marion Hodgdon, please visit our flower store.