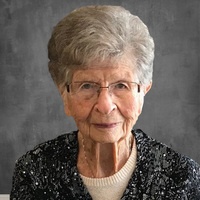 Helen Whitney, age 93 of Mapleton passed away Thursday April 1, 2021 at the Mapleton Community Home in Mapleton, MN. Funeral services will be Monday April 5 at 11am at Hope United Methodist Church with Rev. Lee Miller officiating. Visitation will be Sunday April 4 from 5-7pm at Patton Funeral Home and one-hour before the service at the church. Burial will be at Rice Lake Cemetery. Online condolences can be left, and a livestreaming of the service can be viewed at www.pattonfh.com

Helen Mae was born in Lura Township, Faribault County on October 24, 1927 to Glenn & May (Megaw) Langworthy and grew up on farms near Delavan and attended country school, graduating with high honors from Delavan High School in 1945. During these years, she was very active in 4-H, being a Jr. Leader, later in life an adult leader. On November 11, 1945 she was united in marriage to Wayne Thomas Whitney. They spent 42 years farming the family “century” farm. In 1968 they built their new farmhouse. Helen was an active member of Delavan Methodist Church before it closed, serving on many committees; Sunday School teacher, youth group counselor, UMW and Circles. She was also an officer in the PTA, music parents and a true supporter of her daughters in all their school activities. She was also a member of the Lura Social Club, Birthday Club and Project Group. She later became a member of the Hope United Methodist Church in Blue Earth.

In 1987 she and her husband retired spending winters in south Texas and their summers in Clear Lake, IA. Their time was spent square dancing, traveling to conventions, visiting friends they had met, even to New York, Nova Scotia and Canada. They also enjoyed a Caribbean cruise, trips to Hawaii and a bus trip to Alaska. A special gift from their children was a trip to Ireland with their four daughters and a son-in-law accompanying them. In 2012 she moved to an apartment in Winnebago after the death of her husband of 63 years.

Helen is survived by her 4 daughters: Judith (Leon) Werner of Marshall, Diana (Glen) Skogen of Delavan, Paula (Robert) McCue of New Prague and Patti (Guy) DeLeon of Red Wing. Her 10 grandchildren and 16 great grandchildren as well as many nieces and nephews.

She is preceded in death by her husband, her parents and her brother Harley Langworthy.

To order memorial trees or send flowers to the family in memory of Helen Mae Whitney, please visit our flower store.