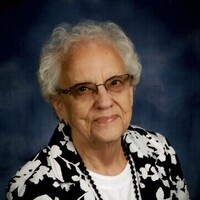 Hazel Jennia Enger, age 96 of Blue Earth passed away on August 26th, 2020 at St Luke’s Nursing Home. Private family/relative services and burial will be held Saturday, August 29th at Riverside Cemetery with Pastor Jeanette Bidne officiating. Hazel was born in the hills of Kentucky on June 7, 1924 to Henry and Lydia Denney. She had four siblings. Following the loss of her mother and sister, Hazel and her father moved to South Dakota. She was cared for by the Puhlman Family in South Dakota for many years, before ultimately settling in Blue Earth, MN.

Hazel met Robert Christopherson in Blue Earth and they married in 1942; their daughter Bonnie was born a year later. Robert served in World War II and was tragically killed during his service in 1943.  Hazel remained in Blue Earth, caring for Bonnie and working at the Colby Grocery, where she met Gordon Enger in 1945, who had just returned home from serving with the Navy in World War II. She and Gordon were married on July 22, 1946. As a family with Bonnie, Gordon and Hazel welcomed three more children, Kathleen, Michael, and Jean.

Hazel later found employment at Telex, where she worked the assembly line building communication equipment. She retired from Telex at age 62. She went on to get her driver’s license at age 65, though never truly gave up the “back seat” driver’s license she had carried for so many years.

Hazel loved to cook and bake – and made delicious banana and pumpkin breads, often handing you a loaf on your way out the door.  She made wonderful homemade meatballs and scalloped potatoes and ham, and family and friends never left her company hungry. She was handy with a sewing machine, completing countless baby blankets and other gifts.

She was a longtime member of Trinity Lutheran Church and enjoyed her time serving as a ‘bulletin lady’ for the church for many years. She volunteered with Interfaith Caregivers, providing companionship for those who needed help in their homes and out in the community.

She adored Gordon, and she never stopped missing or loving him. At the time of his death in 2010, they had celebrated 64 years of marriage and countless memories. “Grandma Hazel” found great joy in her 13 grandchildren, 32 great-grandchildren, and 8 great-great grandchildren – she had arms and a lap made for holding a grandchild.

She is preceded in death by Gordon and Robert, her daughter Bonnie Williams, siblings and parents, and many loved ones.

On behalf of Hazel and the Enger family, we send sincere thanks to the care provided at St Luke’s Nursing Home, United Hospital District Home Health and Hospice, and to Dr. Johnson.

Due to COVID restrictions, there will be a private family service and burial.

Family & friends not attending are encouraged to leave condolences on the website and are also invited to watch the live stream of the service Saturday August 29 at 11am also on our website.

To order memorial trees or send flowers to the family in memory of Hazel Enger, please visit our flower store.