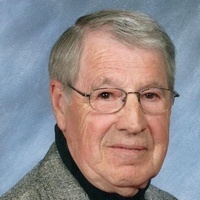 Harold Merlin (Harry) Overton was born on July 31, 1928 in Pleasanton, Iowa to Harrison and Nona (Putnam) Overton.  He was the youngest of six children, he had three sisters and two brothers.  When he was six, his father died.  In sixth grade the family moved to Leon, Iowa.  Growing up he had several part-time jobs before and after school.  They included working at the Creamery, movie theater, service station and J.C.Penney. During school he loved sports, he played baseball, basketball and football, all very well.  He graduated in 1947 and went to work for Penney’s full time.  On May 10, 1948 he married his high school sweetheart Colleen Pearson.  They had one daughter, Jacci Lynn. In 1952, he was transferred to Blue Earth, Minnesota as an assistant manager at the Penney’s store.  He worked for them for nineteen years.  From 1965 to 1969 he was the sales manager for Minnesota Gas Company in Blue Earth and Winnebago.  In 1971, Harry and Mick Ankeny opened a men’s clothing store, The Stag Shop.  He later sold his half of the business to Mick and started Harry’s Antiques. Harry was a member of First (now Hope) United Methodist.  He was on several committees, sang in the choir and played on their softball team.  He loved being with his family, especially his grandsons and like to golf, joke and smile. Harry leaves to cherish his memory, wife of 70 years, Colleen, daughter and son-in-law, Jacci and David Sparks, grandsons, Jason Sparks, Nate (Emily) Sparks, Aaron Sparks, great-grandchildren, Harrison, Theodore and Loretta, sister-in-law, Marilyn Overton, brothers-in-law and sisters-in-law, Darrell and Fran Pearson, Doug and Deb Pearson, many special nieces, nephews and friends. He was preceded in death by his parents, in-laws, Frances and Marie Pearson, sisters, Evelyn (John) Schreffler, Dora (Lee) Cofer, Helen (Milt) Bohnenkamp, brothers, Willard (Irma) and Lloyd, nephews, Fred Schreffler and Ben Olson, sister-in-law, Sherri Olson. Memorials can be given to Alzheimer’s research http://act.alz.org/site/TR/Events/Tributes-AlzheimersChampions?pxfid=492807&amp;fr_id=1060&amp;pg=fund or Interfaith Caregivers. Come have coffee with the family from 2:00-4:00 PM on Sunday, July 29, 2018 at Patton Funeral Home & Cremation Service.  A private family service will be held later.  Harry loved having coffee with family and friends
To order memorial trees or send flowers to the family in memory of Harold Merlin Overton, please visit our flower store.