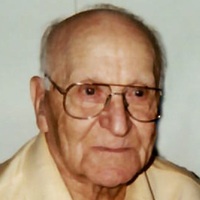 Gordon “GL” Saunders of Blue Earth, passed away at St. Luke’s Lutheran Care Center on Friday, September 18, 2020. He was 110 years old. Graveside services with military honors in honor of Gordy will be held at 11am on Thursday, September 24 at Riverside Cemetery in Blue Earth.

Gordon LeVern was born on July 12, 1910 in rural Blue Earth to Charley and Della (Miller) Saunders. He graduated from Blue Earth High School in 1930. He lived in Blue Earth for almost all his life. He had several jobs, including working in the plumbing and tile business. Gordy enlisted in the United States Army in 1943. In the army, he did a lot of repair work on planes. It is thought that Gordy might be the oldest MN WWII vet still living, but this has not been documented. After his service, Gordy started his business, Gordon Saunders Painting & Decorating. He also did a lot of work with Ankeny and Wiederholt Builders. Gordy married Catherine “Katy” Lang on August 3, 1943 in Chicago, IL. Katy was the love of his life.

Gordy retired on April 1, 1974. After retirement, he and Katy would spend summers up north. They frequented a campground in Walker, and later Bena. Gordy enjoyed cars and driving fast. He kept driving until he was 98 years old. He also enjoyed golf, bridge tournaments with Katy, and playing poker with his buddies. Gordy had his pilot’s license and did some flying in his day. He also enjoyed the outdoors. Hunting and fishing were probably Gordy’s biggest passions in life, after Katy of course. He went on many trips over the years with his friends, fishing in Canada and hunting all around the state. Gordy fished and hunting until his late 80’s and shot his last buck at age 89.

Gordy is survived by his nephew, Gene (Debbie) Murphy of Blue Earth, and many more nieces, nephews, and extended family. He is preceded in death by his wife, Katy in 2003, his siblings, and many of his good friends over the years.

Gordy’s family would like to thank St. Luke’s Lutheran Care Center for the care and love they showed Gordy over the past ten years.

To order memorial trees or send flowers to the family in memory of Gordon L. Saunders, please visit our flower store.