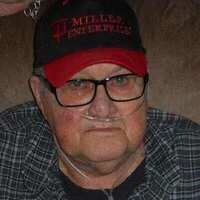 Memorial services will be held at 1pm on Saturday, June 19, 2021 at Patton Funeral Home in Blue Earth with visitation held one hour prior to services. Burial will follow at Riverside Cemetery in Blue Earth. Web tributes may be left at www.pattonfh.com

Frederic Ora was born on July 31, 1935 in Blue Earth to Ora and Alice (Larson) Anderson. He attended Blue Earth schools. After school, Frog enlisted in the United States Marine Corps. Frog married Janice “Jan” Ehrich on April 28, 1956 at St. John’s Lutheran Church in Elmore. The couple then moved to Blue Earth and became active members of Trinity Lutheran Church. Frog worked as a truck driver for many years.

His passion in life was horses. Frog was an avid horseman and could be found at the sale yard for their monthly horse sales. He also enjoyed watching rodeos with Jan. Frog had a great personality and a sense of humor that will be missed.

He was preceded in death by his wife, Jan; an infant daughter, Jill; and his parents.

To order memorial trees or send flowers to the family in memory of Frederic "Frog" Ora Anderson, please visit our flower store.