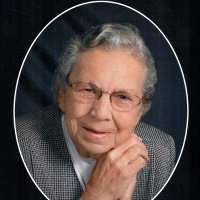 Evelyn Mae (Kasperson) Whitney, age 96, was taken to her eternal home on Monday July 8, 2019. Cause of death was kidney failure. She had been on dialysis since January 2008. A funeral service will be at 11am Monday July 15, 2019 at Faith Lutheran Church in Delavan with Rev. Todd Substad officiating. Visitation will be Sunday July 14 from 5-7pm at Patton Funeral Home in Blue Earth and also one hour prior to the service at the church. Burial will be at West Delavan Lutheran Cemetery. Online condolences can be left at www.pattonfh.com

Evelyn Mae was born in Lura Township north of Delavan on March 13, 1923 the middle daughter of Joseph and Agnes (Lokensgard) Kasperson. She was baptized and confirmed in the Delavan Lutheran Church. She attended school in Delavan and graduated 2nd in her 1941 high school class. She then did house work for others (which found her on one occasion serving as an impromptu midwife) until her marriage to Walter Whitney on March 13, 1943, her high school sweetheart and farm neighbor.

They began their married life farming northeast of Delavan, moving onto Evelyn’s home place in 1947, which is now a century farm. Evelyn enjoyed working outdoors on the farm and seemed always busy with the many chores involving farm life. Over the years she has celebrated her Norwegian heritage by making Norwegian foods and being interested in genealogy.

Evelyn has taken part in church activities at Faith Lutheran Church over the years including teaching and being superintendent of Sunday School, leading Junior Lutherans, attending and being president of Ladies Aid and singing in the choir. Other activities she has enjoyed are traveling, spending over 30 winters in Texas, swimming, playing ping-pong (she was tough to beat), snow skiing behind the tractor, square dancing, playing 500 and bridge, camping and keeping up on news regarding her many grandchildren.

To order memorial trees or send flowers to the family in memory of Evelyn Mae Whitney, please visit our flower store.