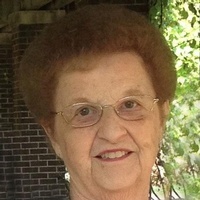 Memorial services for Evelyn will be held on Thursday, May 16, 2019, at 11:00 AM, at Hope United Methodist Church in Blue Earth, with Rev. Russ Jacobsen officiating. Visitation time will be from 9:30am-11:00 am before the service at the church. Web tributes may be left at www.pattonh.com

Evelyn was born November 23, 1934, in Winnebago, MN, the daughter of Earl and Blanche (Deal) Park. Evelyn spent her childhood in Winnebago and in 1952 she graduated from Winnebago High School. Evelyn left Winnebago to attend business college in Minneapolis. At the same time, she and a young man, Gerald (Jerry) Henke, rekindled a friendship which began many years earlier in grade school, and began writing letters back and forth. He from his Army post and she from school in Minneapolis.  Their friendship blossomed into a lifelong love. Jerry and Evelyn were married September 23, 1953, while Jerry was on leave from the Army. While Jerry served the remainder of his military service, Evelyn worked at the Mayo Clinic in Rochester. After this long distance start to their marriage, they moved to Blue Earth where they rented their first apartment. Their little upstairs apartment became home for the happy couple as they welcomed their first son, Steven in 1954. In 1958, they purchased their house in Blue Earth. Their family quickly grew to include four more sons, Craig, David, Dale, and Jon. There were so many wonderful years lived in that home always filled to the rafters with love, laughter, activities, sweet memories and BOYS!

Evelyn viewed her primary calling in life to be a wife to Jerry and mother to their sons— she loved and excelled in her role! In the neighborhood, she enjoyed getting together with the “coffee girls”. The women in this group became honorary sisters and their friendships lasted a lifetime.

As her boys grew, she found ways to include and serve many others. Through the years, Evelyn was active in various ministries in the United Methodist Church. She was a faithful member of UMW. Many times, her contributions to the church involved her love and great skill in baking. Also much appreciated by her family. Her love of children and patience with them and her faith made her very valuable to the Sunday School program.

As their sons began to participate in school sports, Evelyn and Jerry became faithful followers and loyal fans. This continued even after their sons graduated, married, and added children and grandchildren of their own to the family. They were given the honor of being named Fans of the Year by the local sports boosters club.

Evelyn returned to the workplace after her boys were in school full-time. Most memorable among her jobs was her sales position at the Blue Earth J.C. Penney store.

Evelyn was always filled with such joy of life and loved sharing that joy with others — particularly her family. She and Jerry loved each other, their sons and their wives and all of the grandchildren and great grandchildren. She was always so excited and proud to hear of the grandchildren and their latest accomplishments! She will be forever remembered. We are so grateful for her life well lived—we will hold her in our memories and close in our hearts forever.

Evelyn was preceded in death by her parents; her sisters Maxine Hopper and Arlene Campbell; her son, David; and her granddaughter, Emma Grace Henke.

Memorials can be directed to Hope United Methodist Church or UHD Hospice in Evelyn's name.

To order memorial trees or send flowers to the family in memory of Evelyn Aldene Henke, please visit our flower store.