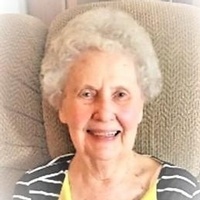 On April 26, 1929, the fifth daughter of Elizabeth and John McAlister was born at their home farm in Thompson, Iowa; they named her ELIZABETH JEAN. Jean, as she was called, embraced her life on the farm, caring for her favorite chicken, Fern and her many dogs and cats.  Jean graduated from Thompson High School and immediately moved to Fairmont, Minnesota, where she became a telephone operator for the Fairmont Telephone Company. It was in Fairmont that she met her life partner, Morris Johanson. Morris and Jean were introduced at their mutual dental office and the rest is history.

Jean and Morris were married on June 2, 1951 and settled into the rhythm of farming the Johanson land in East Chain Township for the next 44 years. The years on the farm not only produced grain and livestock (including chickens!) but also six beautiful children; Peg, Cheryl (nicknamed Charlie), Kathy (deceased), Garry, Brian and Greg. Jean’s greatest pride was being with all her children, at the kitchen table…storytelling. Jean was also active in the school and church activities of all her children.

After the children grew to adulthood, Jean and Morris retired from farming and built a lake home in Menahga, Minnesota. Days were filled with birdwatching, gardening, wildlife observing and yes, occasionally fishing with Morris. Jean, ever the kind, humble and extremely witty person made treasured friends around the lake and within the Menahga Lutheran church community.  After 23 years at the “Lake”, Jean and Morris moved to the community of Blue Earth, Minnesota, living in a condo and then finally settling into Friendship Court Assisted Living.

To order memorial trees or send flowers to the family in memory of Elizabeth Jean Johanson, please visit our flower store.