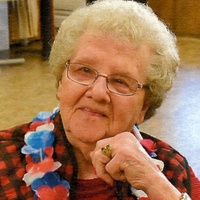 A funeral service will be at 2pm Monday, October 10th at St. John’s Lutheran Church rural Elmore with Rev. Michael Klatt officiating. Visitation will be from 5-7pm Sunday, October 9th at Patton Funeral Home and will continue one hour before the funeral service at the church. Burial will take place at St. John’s Lutheran Cemetery. Condolences can be left at pattonfh.com.

Elaine Marian was born on November 25, 1926, to Louis and Ida (Ristau) Grimmelman in rural Elmore. She was baptized on December 19, 1926, at St. John’s Lutheran Church. When she was only 13 her father died in a farm accident. She was confirmed at St. John’s Lutheran Church on May 12, 1940. Elaine graduated from Elmore High School in 1944, and was married to Floyd Peter on September 2, 1945, at St. John’s Lutheran Church. They farmed in Elmore Township, until Floyd’s death in 1981. Elaine was an independent woman having been widowed for 41 years, continuing to farm for several years with son Randy, driving grain truck to the elevator during fall harvest. She enjoyed working at Tender Years Pre-School in Elmore for several years. Elaine moved to Blue Earth in 1988. She was an active member of St. John’s Ladies Aid/LWML, and choir, and was on the St. Luke’s Auxiliary and Executive Board for several years. She enjoyed volunteering at St. Luke’s gift shop and UHD Hospital coffee shop, as well being involved with 4-H, Farm Bureau, and Home Extension Group.

Elaine loved cooking, gardening, PLAYING CARDS, and other games. She attended many musical programs at the school and was a loyal sports fan of the boys and girls teams. For over 20 years, Elaine “hosted” yearly Peter Family gatherings in many locations, including South Padre Island, TX for her 80th birthday. She also took the opportunity to travel to many destinations with friends. Elaine moved to Friendship Court in January of 2015 and was a resident of St. Luke’s for the past 5 years.

The family wishes to thank all those at St. Luke’s Care Center who so lovingly cared for Elaine over the past 7 years.

In LIEU of flowers, memorials may be directed to St. John’s Lutheran Church or St. Luke’s Auxiliary.

To order memorial trees or send flowers to the family in memory of Elaine M. Peter, please visit our flower store.