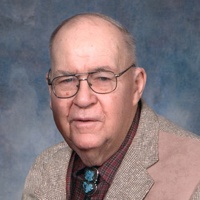 Edward C. Pirsig, age 92 of Blue Earth, passed away peacefully on Tuesday, January 12, 2021. A funeral service will be held at 2pm on Saturday, January 16 at St. Paul Lutheran Church in Blue Earth. A live stream of Ed’s service will be available at www.pattonfh.com/obituary/edward-pirsig.Visitation times will be held from 4-6pm at Patton Funeral Home on Friday, January 15 and one hour prior to the service at church. Burial will take place at Riverside Cemetery in Blue Earth.

Edward was born August 22, 1928 in Blue Earth, Minnesota to Escher and Dora (Miller) Pirsig. He graduated Blue Earth High School in 1947. He attended Mankato Business School for one year. Later he was drafted the Army February 14, 1951 and was stationed at Fort Campbell, Kentucky. He was Honorably discharged on August 30, 1951. Edward met Myrna at Nodak Lodge on Lake Winnibigoshish in 1955. They later married on February 4, 1961 and had two children David and Debra. Edward farmed with his father Escher and his brothers for many years. Then he later farmed with his brother Wesley. In 1975, he farmed by himself and with his son David. Ed enjoyed hunting, fishing, spending time with his family. He loved visiting with his friends and family over the phone.

He is preceded in death by his parents Escher and Dora, wife Myrna, daughter Debra and siblings Berdeen, Wayne, and Wesley.

To order memorial trees or send flowers to the family in memory of Edward C. Pirsig, please visit our flower store.