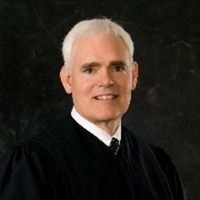 Funeral Services will be held at 11 am on Saturday, January 18, 2020, at Hope United Methodist Church in Blue Earth with Rev. Russ Jacobsen officiating. Burial will take place at Lakeside Cemetery in Fairmont. Visitation time will be held one hour prior to the funeral service at church.

Doug was born on May 15, 1952 to Douglas and Dorothy (Corbett) Richards. He attended Fairmont High School, graduating in 1970. He then obtained a bachelor’s degree in political science from Hamline University in 1974. On August 3, 1974, Doug married Patricia Barke in Fairmont, Minnesota. In 1978, Doug graduated from William Mitchell College of Law with his Juris Doctor degree. He worked as a law partner at Spencer, Johnson & Richards and served as the Blue Earth City Attorney from 1978-1995 before being appointed as District Court Judge, Fifth Judicial District, chambered in Faribault County in 1995. He retired in October of 2017 but was still serving statewide as a Senior Judge. He was honored to be a judge saying it was the best job in the world.

Doug attained the rank of Eagle Scout and was inducted into the Fairmont Athletic Hall of Fame. Doug was a member of the Blue Earth Chamber of Commerce, Lions Club, Masonic Lodge, and Hope United Methodist Church. He loved singing in church choir leading the bass section. He looked forward to tailgating and cheering on the Minnesota Gopher football team every fall with his family and friends. After his wife Pat retired, they took a yearly cruise and Doug always brought his dancing shoes. He especially loved his children and grandchildren, making it a priority to attend their concerts, sporting events, and birthdays.

He is survived by his wife, Pat of 45 years; 3 children, Sarah Darula of Plymouth and her children, Avery and Kenzie, Becca (Jordan) Moen of Mankato and their children, Connor and Cora, and William (Elke) Richards of Alexandria and their children, Aasta and Ingrid; his parents, Douglas and Dorothy; and 3 sisters, Betty (Neal) Johnston, Cindy (Ron) Hillger, and Valerie Carlson.

He was preceded in death by his grandparents.

Memorials, if desired, are preferred for The American Cancer Society or Hamline University.

To order memorial trees or send flowers to the family in memory of Douglas Lee Richards, please visit our flower store.