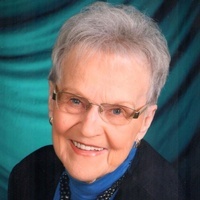 Dorothy Ann Nassen, 88, of Blue Earth, passed away on Wednesday, June 20, 2018 surrounded by her family at St. Luke’s Lutheran Care Center.  Funeral Services will be held at 11AM on Monday, June 25, 2018 at Trinity Lutheran Church of Blue Earth with Rev. Katie Rohloff presiding.  Visitation will be held from 3-6PM on Sunday, June 24, at Patton Funeral Home, 400 E 14th St., and one hour prior to the services at the church.  Interment will be immediately following the services at Riverside Cemetery of Blue Earth.  Dorothy was born on January 7, 1930 to John and Ingeborg (Alfson) Jelle in rural Bricelyn, MN.  She attended Jelle country school as a child.  She was baptized, confirmed, and married at the South Blue Earth Lutheran Church.  She graduated from Bricelyn high school in 1947 and then attended Waldorf College where she received a two-year associates degree in business.  After college, she worked as a secretary at the State Bank of Bricelyn.  Dorothy married Fred Nassen on June 29, 1952.  After their marriage, they settled in Blue Earth where they raised their four children.  After Fred’s passing in 1969, Dorothy re-entered the workforce to support her family.  She raised her family on her own while working full time.  Dorothy worked the majority of her career in Medical Records at St. Luke’s Lutheran Care Center of Blue Earth.  She retired at the age of 84 from Interfaith Caregivers of Blue Earth. Dorothy was an active member of Trinity Lutheran, serving on various church committees.  She loved playing piano at St. Luke’s and for her family.  Dorothy enjoyed playing cards especially, 500 and Bridge.  She enjoyed spending time with her large extended family especially around the holidays. Dorothy is survived by her four children, Julie (Kent) Small of Blaine, Bill (Cindy) Nassen of Sioux Falls, SD, Clair (Cala) Nassen of Blue Earth, and Jody (Brian) Omland of Blue Earth; 10 grandchildren; 17 great-grandchildren; sister, Burnette Loge of Albert Lea; sisters-in-law, Shirlee Jelle of Albert Lea, and Caroline Jelle of Blue Earth; and many other loving relatives and friends. Dorothy is preceded in death by her husband, Fred; parents; three brothers and three sisters. Memorials preferred to Trinity Lutheran Church, St. Luke’s Foundation, or Interfaith Caregivers.
To order memorial trees or send flowers to the family in memory of Dorothy Ann Nassen, please visit our flower store.