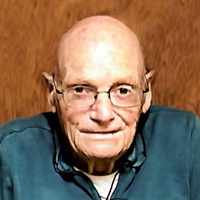 Delos “Dooney” Schock, age 89, of Blue Earth passed away Wednesday, October 7, 2020 at United Hospital District in Blue Earth. Mass of Christian burial will be held on Saturday, October 10 at 11AM at SS Peter & Paul Catholic Church in Blue Earth, with Fr. Andrew Beerman officiating. A visitation will take place at Patton Funeral Home Friday, October 9 from 5-7PM. Burial will be at Calvary Cemetery in Blue Earth, located just north of Riverside Cemetery.

Delos was born July 27, 1931 to Theodore and Cora (Garrison) Schock. He grew up in the East Chain area and graduated with the Class of 1949 from Fairmont High School.

He had a love of farming and pursued it from 1953 until he retired in 1995. He was also a Garst Seeds dealer for a number of years, his hobbies included wood crafting and golfing. On December 16, 1949 he married Mildred Weyhrauch, in 1972 they divorced and on September 8, 1976 he married Marjorie Meyer (widow of Earl Meyer).

He is preceded in death by his parents Theodore and Cora, brother Robert, sister Maxine and sisters-in-law May and Mary along with Marjorie’s parents, Anthony and Helen Lange, her sisters and brothers-in-law, Marcella and John Hochstein, Lorita and Ray Gubbles and sister-in-law Violet Lange.

In lieu of flowers, the family asks for donations in Delos’ memory be made to SS Peter & Paul Catholic Church.

Covid guidelines and restrictions will be in place.

To order memorial trees or send flowers to the family in memory of Delos "Dooney" Schock, please visit our flower store.