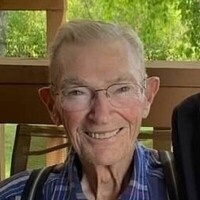 Funeral services for David Clare Peterson, 85, of Blue Earth, MN will be 2:00 p.m. on Tuesday, November 24, 2020 at Life Family Church in Blue Earth, MN.  Viewing will take place one hour prior to the service.  Burial will be in Riverside Cemetery in Blue Earth, MN.  David went to be with the Lord on Wednesday afternoon November 18, 2020 with family by his side at Parker Oaks in Winnebago, MN.

*COVID guidelines will be followed.  Those that are unable to attend are invited to watch the service live at www.pattonfh.com

David Clare Peterson was born May 14, 1935 to Anton and Alma (Haneland) Peterson on the family farm in Verona Township. He was a lucky man that grew up with nine siblings in a home that clearly knew the Lord and had deep roots that were strengthened by great faith.  He worked alongside his many siblings in supporting the Peterson family farm and graduated Huntley High School in 1953.

After graduation David began farming with his older-brother Raymond and entered the Army, where he served from 1958-1963.  On January 15, 1966 David married his bride of 54 years, Florence Swanson, at Deer Creek Valley Lutheran Church in Glenville, MN and they were later blessed with four children.  In addition to farming he also raised feeder cattle until the late 1980’s and dabbled in small locksmithing jobs.  He retired from farming in 2015.

David was a member at Life Family Church in Blue Earth, MN.  He was best known for his ability to fix anything, as his family and friends often referred to him as, “Mr. Fix It;” he and his wife were also known to make the best mini donuts in the area.  David was a funny man that enjoyed fishing, camping, watching westerns, playing cards with his kids, and hearing about his grandchildren’s successes.  He also enjoyed anything chocolate, especially Hersey Almond candy bars and his favorite Norwegian treats such as kringla, cumla, and lefsa. David loved John Deere and had great pride in each of his children and grandchildren.  David was blessed to live at his home until his final weeks as well as have God answer his final wishes:  To get closer to home, to see his wife and family, and to be called home.

Those that are left to cherish his memory and remember his smile include his wife, Florence of Blue Earth, MN; children:  Shelley Peterson of South St. Paul, MN, Jeffrey Peterson and his wife Heidi of Farmington, MN, Melissa Diegnau and her husband Chad of Huntley, MN, and Jeremy Peterson of Lakeville, MN; grandchildren:  Katelyn, Gavin, Lindsey, and Austin; sister Diane Schaper of New Richland, MN, sister-in laws Margie Peterson of Blue Earth, MN and Arlene Peterson of Cross Lake, MN.  David is also survived by several nieces and nephews.

To order memorial trees or send flowers to the family in memory of David C Peterson, please visit our flower store.