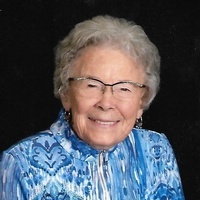 Constance Johnson, 98 of Blue Earth passed away Friday March 22, 2019 at the United Hospital District in Blue Earth. A funeral service will be held 11am Tuesday March 26 at Trinity Lutheran Church with Rev. Jeanette Bidne officiating. Visitation will be one hour prior to the service at the church. Burial will take place at Hope Lutheran Cemetery in Minneota, MN.

Connie was born January 13th, 1921 in Minneota, Minnesota, to Ole Werpy and Sarah Geiwitz Werpy. Connie grew up in a household full of love and laughter with five brothers (one of them, her twin brother Galen) and one sister. She spent most of her childhood and teen years in Minneota, graduating from Minneota High School in 1940. Connie then went on to graduate from the Minnesota School of Business.

On October 29, 1946 she married Robert Milton Johnson. Bob was a classmate, but not a beau until later. Connie and Bob starred as leads in the Senior class play where they kissed and were wed on stage. It must have been fate. It wasn't until Bob's graduation from college, followed by his active duty in the Air force, and Connie's adventure to California with three friends, that their love ignited into a beautiful 49-year marriage.  Their marriage was filled with mutual admiration, fun, and total loyalty. As soon as they were wed, Connie and Bob moved to Windom where they raised three children, Eric, Kay, and Joli. While Bob ran the Fair Store, Connie became an active member of Windom's community, in addition to raising the children and developing many strong friendships. She was a dynamo of energy and purpose, always trying to make the world a better place in line with her values of compassion and mercy. At the same time, no matter how much time she put into making things right, she always had time to laugh and tease.

Connie was involved in Windom's community in many ways. She owned a Norwegian gift shop and did bookkeeping for the Fair Store. She participated in organizations including PEO, Eastern Star, Mrs. Jaycees, Tourist Club, Circle, and the Windom Hospital Auxiliary. She taught Sunday School. Connie and Bob were founding members of the Windom Country Club. Connie was a lifelong member of the Windom Concert Association. She was an avid golfer and bridge player. Connie and Bob loved to dance and filled their house with music, having a special fondness for the Big Band music of Glenn Miller. Later in life Connie became very active in politics, writing letters to the editor and serving as a delegate to the DFL Convention. She also loved crossword puzzles and Scrabble.

Upon Bob's retirement, Connie and Bob became snowbirds with their exodus to Arizona each winter. Upon Bob's death Connie continued the yearly flight for another 10 years, renewing ties with friends from Minnesota and branching out to make new friends and acquaintances.

Additionally, Connie was a wonderful cook and hostess. She loved entertaining. She had a sign in her house that read “Live to Dance, and Dance to Live”, and that is how she lived her life both literally and figuratively.

The family wishes to express our gratitude to all of the doctors, nurses and staff at St. Luke's Lutheran Care Center and UHD Hospital who gave such loving care to Connie during the last year of her life. Special thanks goes to Dr. Odden and Dr. Johnson and to Connie's dear friend and caretaker Andrea Nerhus.

In lieu of flowers donations to St. Luke's Memory Care would be greatly appreciated.

To order memorial trees or send flowers to the family in memory of Constance Levette Johnson, please visit our flower store.