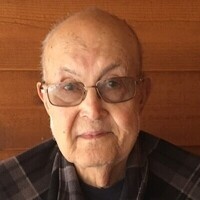 When Arnie was 10 years old he moved with his family from South Dakota to the Blue Earth area in a Model A.  He attended country school while helping on the family farm.  One evening while jumping parking meters in Blue Earth he met the girl who would change his life, MarvisAnn Loge. On June 17, 1956 they were united in marriage at the United Lutheran Church, Frost.

Arnie worked at the Frost Farmers Elevator and proudly served as Chief of Police in Frost for 40 years.  He also was a volunteer for the Frost Fire Department and the Frost Ambulance.  He served on the church council for several years.  After his retirement he continued to serve as bailiff for Faribault County.

Arnie enjoyed everything about being outdoors.  He loved to fish, hunt, go camping, vegetable and flower gardening, bird watching, woodworking and coffee and dice.  He loved training and rescuing any animal that needed a home.  He enjoyed talking with people and teasing the little ones.  He spent countless hours sitting on the tailgate sharing stories and visiting with the neighbors or anyone else that passed by.  It was hard to get the last word in with him.  His sense of humor and wit stayed with him right up to the end. The greatest joy came from the time he was able to spend with his wife, children, grandchildren and great grandchildren.  He often said how lucky and blessed he was with his family.

Due to the mandated healthcare precautions, a Celebration of Life Service will be held at a later date.  A private family burial will take place on Saturday, April 18, 2020.

To order memorial trees or send flowers to the family in memory of Arnold Karge, please visit our flower store.