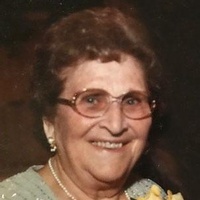 Angie (Giesinger) Murphy Angeline Murphy, 91, died on Tuesday, October 16, 2018, after several years of declining health, at the Lakeview Methodist nursing home in Fairmont, Minnesota.  Visitation will be on Thursday, October 18, from 5-7 PM at Patton Funeral Home in Blue Earth. Mass of Christian Burial will be celebrated on Friday, October 19, at 11 AM at Saints Peter and Paul Catholic Church, 214 S. Holland Street in Blue Earth, with Father Peter Klein officiating. Interment will be at Riverside Cemetery, in Pierre SD on Monday after a mass in her home church.   She was born near Strasburg, ND November 9, 1926, to George and Barbara (Welk) Deringer; one of eight children.  She married Frank Giesinger on Nov 26, 1946 at Holy Trinity Catholic church in Krassna township ND outside of Strasburg and raised 6 children. Angie and Frank traveled throughout North Dakota and Montana, working on dam construction projects, until they set down roots in Ft. Pierre in 1956 to work on the Oahe Dam. She enjoyed waitressing all her life in the Pierre and Ft. Pierre area, until her retirement. She loved and adored her family and prioritized life around them. Angie was full of personality and well- loved by many.  Her legacy is that of being generous, kind-hearted and having a great sense of humor. Frank and Angie enjoyed their retirement, shared between Apache Junction, AZ, (where they met many friends), and Pierre SD, until Frank’s death in the year 2000. She later married a longtime friend, Bob Murphy of Guckeen, Minnesota, in 2004.  Angie and Bob lived on a farm near Guckeen until she moved to the nursing home in Fairmont. Angie lived a full and happy life and enjoyed being a devout Catholic, traveling, embroidering, dancing, nature and spending time with her family and friends. She is survived by her husband Robert Murphy, of Guckeen, 5 children, Dianne (Marlin) Larson of WY, Kenneth (Kay) Giesinger of CO, Donald (Diane) Giesinger of WY, Randy (DeeDee) Giesinger, of WY and  Lee(Val)  Giesinger of CO, step children, Connie Murphy (Brian Blow) of Howard Lake, Jim Murphy of Guckeen, Greg (Dixie) Murphy of Fairmont, Judy  (John) Herdan of Minnetonka, Pat (Jim) Marvin of Ft. Collins, CO, Cindy (Craig) Oseland of Stillwater, Mitch (Diane) Murphy of Guckeen and Kelly (Sherri) Murphy of Holmen, WI;  son-in-law, Kim Kerns; 8 Grandchildren, and 11 great-grandchildren. Many other relatives and friends. In addition to her parents, she was preceded in death by her first husband Frank Giesinger; daughter Lori Kerns; 9 siblings, Eugene Deringer, Pius Deringer, Victor Deringer, Leo Deringer, AnnaMary Schwab, Agnes Kuss, Christine Baumgartner, and infant siblings, Alois and Mary Anne.
To order memorial trees or send flowers to the family in memory of Angeline K Murphy, please visit our flower store.