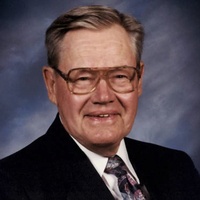 Andre was born on March 21, 1927 in Faribault County to Sven and Esther Torkelson. He attended Elmore High School, graduating in 1945. Andre then joined the United States Army, admirably serving his country before being Honorably Discharged as a Sergeant.

On May 24, 1953, Andre married the love of his life, Arden D. Rau, at Grace Lutheran Church in Fairmont. Together, they raised three devoted Sons: Paul, Eric, and Craig.

While on duty overseas, Andre developed a deep fondness for traveling. The family would crisscross the United States over the years as Andre passed on his love for exploring to his children and grandchildren. Andre and Arden would continue their travels long into their retirement, but all roads would eventually lead back to the farm.

A farmer all his life, Andre believed in the importance of a hard day’s work. He relished life on the farm and wouldn’t have chosen to build his family anywhere else. In his small town, Andre found a deep appreciation for community. His commitment to this community was best exemplified by his many years of service dedicated to education. He served with distinction for 20 years on the Rake Community School Board and another six on the Board of Education of Northern Trails Area Education Agency. In 1988, his efforts were further recognized when he received a distinguished service award from Iowa Lakes Community College.

Andre is preceded in death by his parents and his wife, Arden.

Andre is remembered fondly as a friend to all and will be dearly missed.

To order memorial trees or send flowers to the family in memory of Andre G. Torkelson, please visit our flower store.